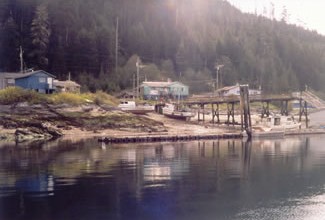 The village of Gwa’yasdams is a small community located on Gilford Island, an entrance to the mainland inlets. Their present population is 250, 35 of whom live on reserve.

The Thunderbird was living in the Upper world with his wife. The name of Thunderbird was Too-large. Now, Too-large was very downcast, and he spoke to his wife, saying, “Let us go to the Lower World, that I may see it.”

Then his wife spoke to him, “Husband, do you know about your name, that you have the name Too-large, for you will be too big a chief in our Lower World?”

Despite his wife’s advice, Thunderbird told her to get ready to go. Then he put on his thunderbird mask and his wife also put on her thunderbird mask. They came flying through the door of the Upper World. They sat down on the large mountain, Split-in-two, near Gilford Island, and they saw a river at the bottom of it. Too-large said, “Let’s go down and look at that river.” So, they flew down to sit at the mouth of the river near where a man was working alone on his house.

The man was struggling to raise a beam and said to the Thunderbirds, “I wish that you would become men so that you could come help me make this house.

Adapted from Boas and Hunt,