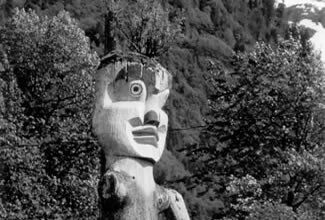 Gwa’Yi Village, home of the Tsawataineuk People, is surrounded by a land of beautiful mountains. The journey up the Kingcome River to the village begins with a monumental petroglyph design of a Copper. The ice-cold river serves as a migratory route for salmon, trout, and oolichans alike. The detrimental impacts of logging have significantly reduced the numbers of these species.

Once you have reached the village, also known as Kingcome, you are graced with an abundance of peace and beauty. The natural settings of wildlife and forestry set the tone of the village.

The landscape captures the heart of all who visit Kingcome. It is the home of approximately 75 members on-reserve, and 500 members off-reserve. The location is approximately 290 km northwest of Vancouver.

When daylight first came to our world, two wolves became human beings. One was Kawadilikala, the first of the Dzawada’enux. The other became Kwalili, the first of the Haxwa’mis. They lived for a long time at Gwa’yi, where their numbers increased. Both were shamans.

One day, they were playing a game, throwing a piece of quartz. Kawadilikala told his children, especially his daughter, not to look outside while the game was being played. However, his daughter disobeyed and looked through a knothole in the wall of the house. Kawadilikala was then unable to catch the quartz thrown to him and it landed on a mountain, now named for the quartz. Because he was so angry with his disobedient daughter, Kawadilikala killed her, and plucked her body to pieces, which became eagle down. He tossed the down into the air, where it floated away. So Kawadilikala lost the game to his younger brother kwalili.

Then, the two brothers prepared for the beginning of the great flood, by carving canoes. Their treasure was the wolf dance. They had many wolf masks, which they put into their finished canoes along with all their other masks. When the flood came, they anchored their canoes to the top of a high mountain called Kaxsidze! The canoe carrying the masks drifted away. After some time, the water subsided and the brothers stayed where they were.

Kawadilikala howled like a wolf to the four corners of the world. From the land of the Musgamagw came an answering wolf howl. Kawadilakala said to this younger brother, Kwalili, “We are all right. The answer has come from others like us,” although they never saw the people who answered.